Oh my golly, y'all! Sexybeast & I had the best time on Saturday night. We got to see DEVO live!!!!!!! They picked up exactly where they left off in 1989. It was fun and fast paced and engaging. Best of all SB didn't have to slap around any drunken assholes.

It was a great mix of new and old songs. They had on those ridiculous flower pot hats, the boiler suits & the syncopated technotic dance moves. 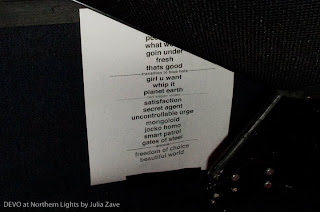 Here's the set list, you can't see the first few songs which were "Don't Shoot (I'm a Man)", "Peek A Boo" & " What we do". I was practically pissing my pants because they did some old faves of mine, "Uncontrollable Urge". It sounded amazing live!!! Also "Smart Patrol" which I didn't even know they perform live anymore.

Whoa! Booji (pronounced Boogie) Boy came out to sing the encore. For those of you that are not in the know (you pins!), Booji is a de-evolved human w/ the brain of an ape. He used to scare the hell out of me when I was younger. Do yrselves a favour, my awesome readers, youtube DEVO's old videos and check out the creepiness of Booji Boy.

The only issue I had the whole night was I got over heated and dehydrated. I thought I was going to pass out and sat down during the encore. Small price to pay to view greatness.
Posted by phairhead at 3:07 PM

Devo was one of the 1st records I bought for my very own. WoOt!

Have you seen the Whip It flowchart? It's hilarious.

I knew I liked you for a reason, Lion :D

Whip it flowchart? Sounds awesome, have to check that out!

JAG: it was a blast!! easily one of the best concerts of my life :D