2. To compliment Kimber's question from last week.... have you ever fell down the stairs? Yes. It hurts.

3. Have you ever written to a company about their product? Ever called them? 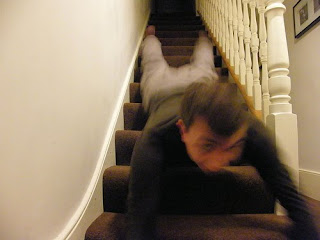 I complained to a watch company. They did nothing! It was a cool watch too. It was a bubble filled w/ viscous liquid.

4. Your dog/cat/snake/iguana/pet skunk (or just fill in your pet's species) goes to the vet. Ok, you take them to the vet... most pets wouldn't go on their own. The vet tells you that your species has cancer. Do you:
I choose C.

5. What is your favorite comfort food? Potatoes, served any ol' kinda way.

6. If your child was put in jail for putting a gun in their spouses mouth and pulling the trigger (even though the gun wasn't loaded), strangling them and breaking their arm... would you post bail for them? No. Imaginary children are the worst kind, aren't they?

7. If elephants had wings, how many feathers do you think they would have on each wing? Eleventy bajillion.

8. Is there anything growing in your refrigerator right now? NO!

9. What did you do with your Thursdays while we were on a break? A break from what? I work 40 hours a week.

10. Would you donate to the Kimber Ark Building Fund and donate wood? She is about to float away after all... Sure.

11. If I were to send you a letter and I wanted to put a little heart sticker on the back of the envelope, what color sticker would you like it to be? Grey-blue.
Posted by phairhead at 5:19 AM

" No. Imaginary children are the worst kind, aren't they?"

From #1 I'm imagining someone taking their pants off, someone walking into the room unexpectedly, and then awkwardly shooting their hands in the air.

we were thinking the same thing on #1 hahaha cool answers!

u may view mine here

A break from what- good one :)

Have a great Thursday!
http://iamharriet.blogspot.com/2010/01/is-there-anything-growing-in-your.html

I would not post bail (and I have kids) but I would visit.

There is nothing worse than imaginary kids who misbehave.

The Girl Least Likely To said...

I've fallen downstairs on my butt, not fun.

#8 - there would have to be something in there to grow on ! mine is empty

Next time, complain about the watch company on Twitter. It may not work, but it might embarrass them enough to do something. I did that the last time I my burger from McDonald's was stone cold. They tweeted me back and sent me a bunch of free coupons for burgers and coffee.

AJ: then tripping over their pants! hee :D man that's a great visual. thanks for the laugh

thanks for the tip, staci :D

BD: that's why you look so good. you live on air :D