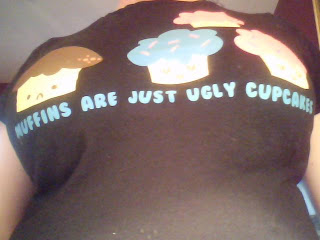 That's me in in all my chest-ical glory.

For the Quickfire, another lame Vegas schtick. The cheftestants had to roll the dice on a craps table, the total on the dice was the amount of ingredients they could cook w/. Anybody else associate craps w/ poo? Just me then. And on the bottom end of the things were Jesse (aww, I like her) w/ her mushy scallops, Eve and sloppy yuckiness and asparagus and Bryan w/ his raw poached fish. And the wiener was Bryan's brother Michael. That's gotta hurt! He made a barfy looking but tasty gazpacho . He gets immunity and 15g's.

And for the Elimination Challenge, it was a battle of the sexes as the boys and girls had to prepare a luncheon paired w/ an alcoholic beverage for a Bachelor/ Bacherlorette party. And Ashley, one of the lesbian cheftestants had a fucking cow over the challenge. The personal is political but sometimes you have to separate yrself from that shit. The boys won and the extra special winner was Bryan. Ah sweet redemption of the guacamole variety. And packing her knives was Eve. Apparently she doesn't know how to season food.

I always thought cupcakes were just muffin whores. Who knew? What does that make ding-dongs?

hello, my name is eternal, how are you?

now on the topic of muffintops...

eternal: i can't be hemmed in by rules!

Does that make me bakery gay?

I also agree, unless they are heavily coated in a crumble. Then they are moderately attractive.

lion: only in the sense that yr lively ;)

albanyjane: the rest of the shirt is funny too! 'cause the muffin is crying and the cupcakes look smug. poor lonely muffin : (

Lol! That is awesome. That shirt rocks.

AR: thank you really. it means a lot to me that you don't think i'm really lame : )

Chesticals = glory... those are two words that belong together!

we need to make it part of the lexicon