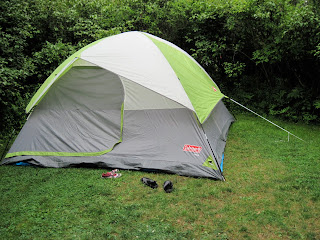 These were are digs for the weekend. SB and I headed up to Glimmerglass State Park on Friday out in Cooperstown. iPhone must have had a bug up it's butt because we circled around the camp ground for 30 minutes before we got there. ARG!

The major pro for staying @ GG was the Otswego Lake located w/in several feet of our "primitive' camp site. The water almost looked blue, it was like swimming in a bath tub, y'all! Gorgeous! 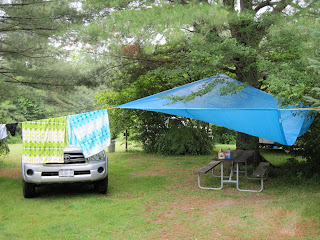 SB rigged up a clothes line a protective covering for his beer. But the fascists that run the camp site said it against the rules to have ropes hanging from the trees. 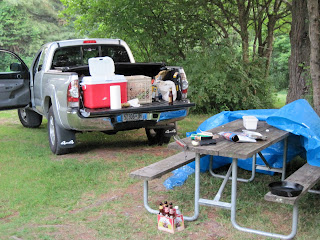 Here's the new and poopier version :(

Another pro for the camp ground is they sell dirt cheap fire wood, $5 a bundle. 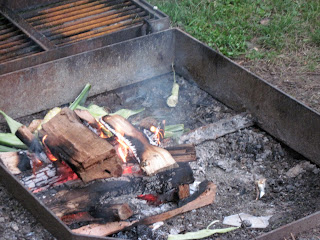 SB & I had a last minute conversation about the food we wanted to prepare. Dogs, corn on the cob and one night out for dinner. And a mystery bag! At the bottom of our chest freezer, I found a vacuum sealed bag of patties. It came from my Extra Helpings meat box but I couldn't remember what exactly it was. As it defrosted, it became apparent there was onions and peppers in the discs. SB reasoned it must be sausage. Nope, they turned out to be hamburgers. Tasty too! 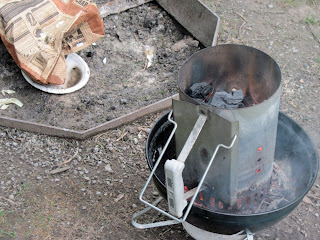 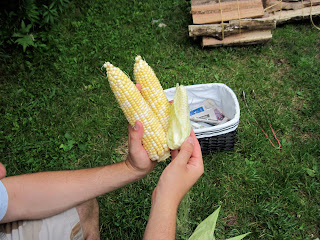 This corn had a weird baby cornlet/Siamese twin/mutation attached to it. It wasn't edible but this cute little chipmunk sure enjoyed it. 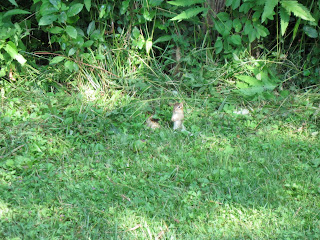 After another delicious swim on Saturday, it was time to hit the showers. Our site only had Port-o-Johns. I'm still trying to forget about them! The beach only had toilets and changing rooms. Where, oh where, could the showers be? Turns out they only had one set of showers at the sites located waaaaaaaayyyyyyyy far away from ours. Plus no parking by the showers. Loooooooonnnnng walk.

After the trek to the showers, we went to Ommegang Brewery for a tour and tasting. We got the Witte, a nice, light summer brew, and Rare Vos which was indescribably good. I also got some dark chocolate w/ pomegranate.

And hey, guess what, there is a Stagecoach Coffee in Coopertown. Neato!

We had cheap eats at a little pub, SB had surf n' turf and I had gigantic prime rib.

That night there was a double thunderstorm. The sky was lit up like Chernobyl w/ only a thin covering of nylon to protect us. It went on for hours on end. It was oddly exhilarating!

Next vacation in August...
Posted by phairhead at 3:25 PM

A). Showering while camping is for pussies.
B) Thinderstorms while in tents are for sexing.
C). Why can I not get the name of the brewery right. I just call it ohmygosh. Did they plan that?

Lion: sweaty and stinky does not = nookie :D
& yes the good people of Ommegang did plan that ;)

That sounds like a lot of fun. Your pics are great too!

JAG: we had the best time!