The TT questions are brought to you by Berleen, the color of Pacific Ocean and the number that comes after 393.

So yeah, it's a holiday weekend. 4th of July... Independence Day... whatever you want to call it. What are you doing on July 5th? Having a day off w/ SB

Have you ever known anyone who has been kidnapped? Uhhhhhh.......no!

Does wiping with newspaper make you a smartass? No, that makes you a yellow journalism ass.

If someone sends you - or you stumble upon a link that will show you celebrity death photos, do you click the link? Depends on the celebrity, I don't like looking at gross stuff.

Do you decorate your computer/laptop? No, we respect the Apple

You see Bud and his lady out walking in a park... suddenly she stops and kicks him square in the ass. What did he say to her? "Is it me or are you getting fatter?"

There is a cockroach, a tarantula and a mouse in the room - which one do you kill first? Cockroach!!!!!! Blech :P

Did you know that a hay bale can start on fire by itself? Do you know how? Wait....for cereal?

Have you ever played Battleship? B-12, YOU SUNK MY BATTLESHIP! Love that shit! 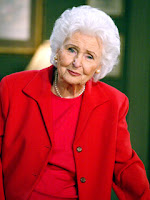 (Francis, the actress, died in February, Alice (the character) died last week). She was 91 years old and was portrayed as a smart, witty, funny, loving, always gave the best advice type woman. Wonderful mother, grandmother, friend... many characters (and cast members) commented on how they strive to be the type of woman she was. Is there someone in your life that you strive to be like? Yes and I'll never say who.

Do you attend parades? Occasionally, it's been a long while.

If Berleen were to purchase three 10-gallon tubs of the peanut butter that they use at Dairy Queens, would you think any less of her? Heck no!

If all the flowers but one kind withered and died, never to grow again, but that one kind of flower would grow worldwide forever, what would you want the surviving flower to be? Lily of the valley
Posted by phairhead at 4:50 AM

I too loved playing battleship...and your description answer was super.

My Thunking's HERE if you'd like to stop by for a visit.

JAG: it's my fave flower

Cigarettes and bourbon. Good one :)

Gerber Daisies. They are so damn happy.

Dijea: oooh! Love those too :D

VaporFi is the #1 electronic cigarettes supplier on the market.